The electronic voltage stabilizers electronic voltage, STE series, guarantees a high efficiency and perfect output voltage stability. Made entirely with solid-state components and characterized by a very high speed of adjustment, the STE stabilizers are provided with a modern design, highly reliable, silent and they don’t have magnetic dispersion, therefore they can be installed in any working environment and in proximity to any equipment. The adjustment of the output voltage is performed by a series of static switches controlled by an electronic circuit. The STE series is provided with an autotransformer which, together with a screen between input and output, allows the total elimination of any disturbance of the mains.

The ELIT electromechanical stabilizers don’t introduce alterations to the waveform and they are able to supply loads with deformed current waveforms, without affecting the output voltage. Not being affected by the power factor the ELIT electromechanical stabilizers can feed any load, and their performance does not change with the variation of the load from 0 to 100%. The booster transformer allows you to exploit the full range of the voltage regulator and to circulate in the brushes only a fraction of the rated current. 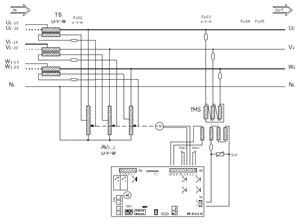 The speed variator is driven by a dc motor which, in turn, it is controlled by an electronic control circuit completely static with two thresholds.
The first is proportional to the error and the second is ON-OFF depending on the amount of correction needed. Also the brush position of the speed variator is electronically controlled.
The features shown here can be modified to meet the needs of the customer. The electromechanical regulators, described herein, exploiting the capacity of the system booster transformer + autotransformer with variable ratio to add or subtract voltage to the line on which the booster is connected in series. In fact, the speed variator is capable of feeding the primary of the booster transformer with a variable voltage, both in width and in polarity and consequently of transferring at the secondary in series with the line, a voltage that will be added vectorially to the voltage at the ends of the booster transformer.
A control board, fully static, acting on the ratio-motor mechanically connected to the brushes of the speed variator, allows to compensate for voltage variations in line. 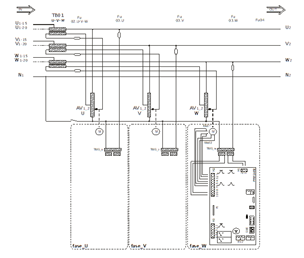 In the case of three-phase stabilizers with independent phase control, the system is realized with a star connection of 3 single phase stabilizers. Each single-phase stabilizer can adjust the voltage between its own phase and neutral, that must be present in input for a correct operation of the equipment. In this way it is able to supply loads with unbalanced input voltages up to 100% while maintaining the accuracy of the voltage to the load.
In this way the system appears to be with reduced dimensions and with an high efficiency. Because of the low impedance in series with the mains, the electromechanical stabilizer turns out to be insensitive to the power factor of the load, not introducing appreciable harmonic distortions too.

The load is always powered by the inverter with sinusoidal voltage and frequency stabilized, using the energy from the input mains.
Our three-phase UPS, without batteries, can be programmed, with the use of a code, to function as stabilizers. The main advantages of this solution are: 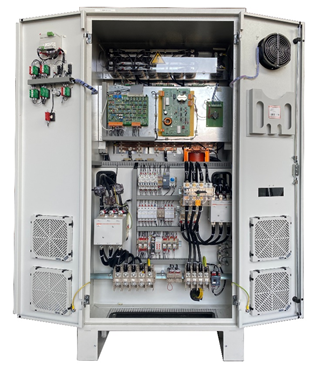 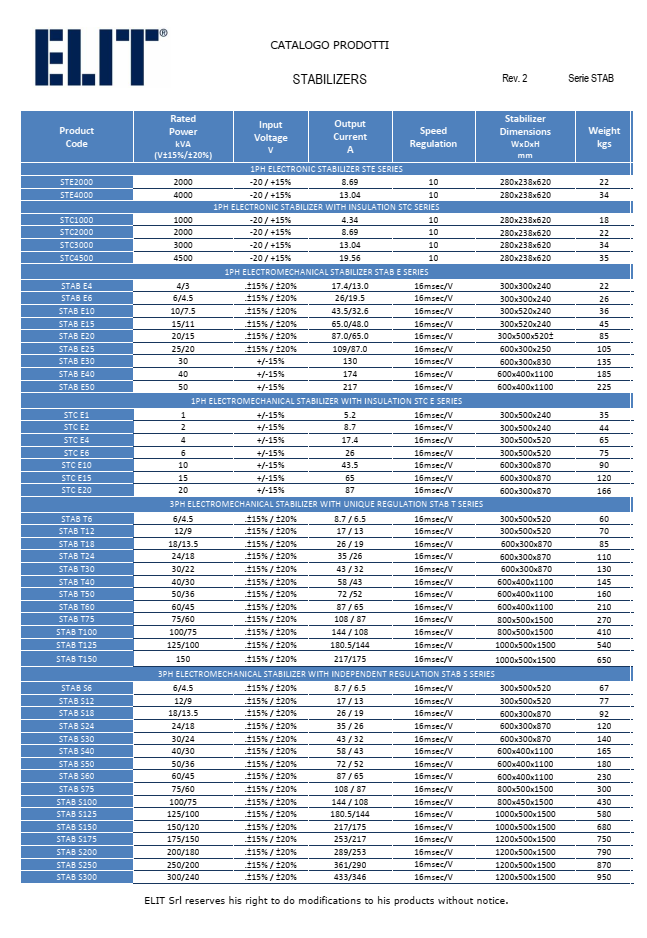